The history of La Luz del Duero is like a part of the history of Spain. More than 110 years, a Galician young couple and newlyweds, decided to undertake the long journey to Argentina. Together, Mr Serafín Fernández and Mrs María Núñez were looking for the place where they found their life. They left behind their own families, which, they sensed, they would never see again. They arrived a luminous morning, and in their pockets they only had a written paper with the name of the village where one cousin of Mrs María lived. There was work for the both in the Argentine Pampas, a hard work, from sunrise to sunset. It began a new life. Over the years, the children arrived. All of them were brought up loving the land and its yields, since Mr Serafín has been vintner in “the vineyard terrains that surround the Peñafiel Castle, crossed by the Douro river”. Just like that, he used to tell his grandchilren watching his Argentine vineyards, in those days when those words got a lump in his throat. It happened then, as the poet related, since the grandfather, that he had been vintner in his mother country, and vintner, carrier, pressman and winemaker in Argentina, one day he fell asleep without return to Spain. He asked his childs to make the promise that they would return to the North winds. The fouth generation of the family returned to the land of their granparents, to those “vineyard terrains that surround the Peñafiel Castle” for translating there everthing learned with the aged vineyards and the new Mendoza wines, in the Andes Mountains.  In Spain they patiently chose, for several crops, that land and that winery that allow them produce wines according to their own vintner lineage. These wines would be a “thank you very much” to their Spanish brothers because, in the end to this land, to its vines and its vintners, nowadays they are what they are: caretakers of the vineyard, vintners, winemakers and wine lovers.

La Luz del Duero was founded almost thirty years ago by Spaniards below the Peñafiel Castle, is the vineyard terrain that synthesizes the heart of the Ribera del Duero, the Denomination of Origin which is world-renowned for its stately style and its grapes, that seem that they grow knowing that they will be the best wine of Spain.

The name of the wine derives from Pintia that, in turn, is the name of an ancient vaccea city, located in the distric of Padilla de Duero (Peñafiel) in the province of Valladolid. 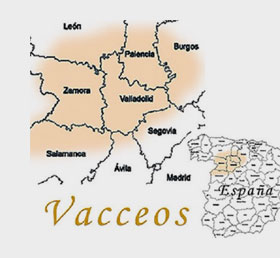 In the third century B.C., the Vaccaei were the first settlers living in the center of the Douro Valley, in the lower course of the Pisuerga river, an area that nowadays could be the present province of Valladolid, a large part of Palencia and some areas of the provinces of Zamora, Segovia and Ávila.

They arrived in several waves to the area and founded cities like Pinta or Palencia,  leaving testimony of their political and social organization that have allowed to recreate their presence.

For years, it was thought that Valladolid was the old Pintia; however, neither the road distances or the archeology of the city showed it. The archaeological excavations that have been made in Padilla de Duero have discovered a major population that has been identified as the location of Pintia, which in 1993 was declared Historical Heritage of Spain.

VALPINCIA is the castilianization of the vaccea words that meant VALLE and PINTIA. It is a tribute to our ancestors that populated the región and created our different vineyard terrains, from where the best wines of Spain are produced.